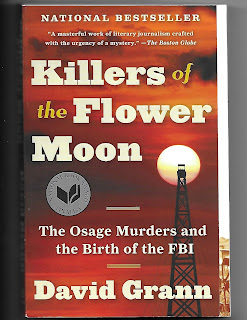 Killers of the Flower Moon by David Grann is a non-fiction work of literary journalism that reads like a mystery.  It concerns the Osage murders and the birth of the FBI.

Cover blurb – In the 1920s, the richest people per capita in the world were members of the Osage Nation in Oklahoma. Oil was discovered beneath their land and the money poured out of the earth into a life of mansions and cars.

Then the murders began. We see the story from the viewpoint of Mollie Burkhart as her sisters became prime targets and relatives were shot and poisoned. Others in the Osage nation died under mysterious circumstances, and even those doing investigations ended up dead. The death toll rose and the overall case was taken up by the new FBI and young director, J. Edgar Hoover. Hoover turned to Tom White, a former Texas Ranger. He in turn used an undercover team that included a Native American agent. They infiltrated this last remnant of the Wild West, and together with the Osage began to expose one of the most chilling conspiracies in American history.

Gann’s research is thorough and his writing is clean. You meet the characters, learn the backgrounds, and are invested in the Osage and their families. Not everyone is clean and pure, but the cold hearted deaths are inexcusable. This book shoots straight in its presentation, and the words will pierce your heart.  Killers of the Flower Moon is an enlightening read.