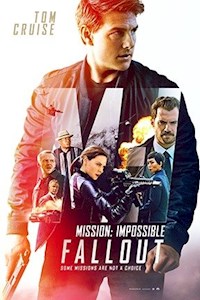 Mission Impossible – Fallout is incredible movie making and a top notch addition to the whole series. Tom Cruise (plays Ethan Hunt) is aging but still believable as he foils the plot of M16 operative turned anarchist Solomon Lane (Sean Harris). Cruise dives, dashes, zooms, careens, and also climbs into a helicopter. His derring-do stunts are legendary and gasp worthy.  His sidekicks played by Ving Rhames (Luther), Simon Pegg (Benji), and Rebecca Ferguson (Ilsa) are reliable and add some humor and drama to the movie.

There are plenty of double-triple crosses.  Vanessa Kirby’s White Widow brings a lot of energy to the film – is she good or bad?  Henry Cavill’s CIA operative is assigned to shadow the group. Oh, he’s a cool cucumber and there are some tight scenes with Cruise. Angela Bassett is a top dog and she and Alec Baldwin go toe to toe in regards to the departmental power struggle. There’s plutonium out there with the potential for disaster. Tick Tock Tick….

Lots of travel, action, kick moves, and more. The plot almost goes too quick – I had to think a bit to keep track of who was doing what to whom and why? But there’s heart in this film too – some golden moments with Ethan and his people demonstrating a little fatigue, some world weary concern. Whew! This is a quality summer blockbuster. Cruise runs and runs, defies gravity at times, hangs from a rope, and more. He is his own mission impossible against time.  But I recommend you use your time to see MI – Fallout