Book Review - Leopard at the Door 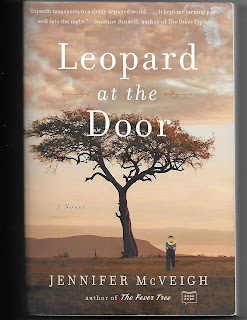 Leopard at the Door by Jennifer McVeigh transports you to 1950s Kenya. The British Empire is fading and sweeping change rumbles. Rachel returns to her home after six years in an exile of sorts. She was sent to live in England with a stodgy aunt and uncle after her mother is killed in a car crash. Now graduated, a young lady, she’s eager to dig her hands into her late mother’s garden, ride her horse over the lands she loved as a kid, and breathe in the air, hear the hoots, growls, and haunting howls of the animals. Swahili phrases return to her, and she’s eager to resume her African life.

But alas, many changes cause upheaval. Her father’s new companion is an intolerant woman who’s removed traces of Rachel’s mother and appears to resent Rachel’s return.

Cover blub – The political climate of the country is growing more unsettled every day. Looming over them all is the threat of the Mau Mau – a secret society intent on uniting the Africans and overthrowing the whites. As Rachel struggles to find her place in her home, she initiates a secret relationship. One that will demand from her an act of betrayal. But she has some secrets of her own. Her knowledge brings her power.

The author obviously did research to bring this fictional story to life. I found the backdrop fascinating and the characters are rich. You root for Rachel to find her footing, redeem the hard work her mother put into embracing Kenya and its people, and you root for Rachel to overcome evil forces (hint – I’m talking within her own household family) and survive.  The leopard represents a silent, lurking, smart creature that might not be seeking your best interest. Beware of footsteps in the night.