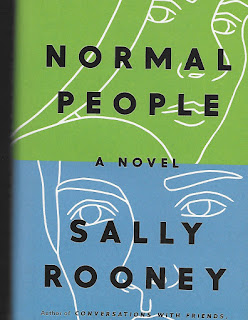 Lots of buzz on this book and writer. Young, wise, and in tune with the times. Indeed, Sally Rooney's writing is quite good and I can see where she does have a grasp of the younger generation. However, for me, that did not make these people interesting. Yet, maybe, that's what does make them "normal."

Whiny, self-absorbed, and often annoying, Connell and Marianne have a secret relationship that isn't that big a secret. He's popular,a football star, and smart. She's lonely, smart, and strange. He's poor and is mother works at Marianne's house. Marianne's rich but doesn't flaunt it, yet there is that class distinction - stuff she takes for granted.

They strike up an intense relationship in high school and he seems to be her rock.

A year later, at Trinity College in Dublin, Marianne is in her element - a niche with friends and a cool aura. Connell's back being a small fish in a big pond. The two clash, connect, and veer into deeper corners.

Normal People was easy to put down. I never rooted for these two, whether apart or together, and their friends were a drag too. I'm in the minority in regards to reviewing this book. Every other review I read gushed about Ms.Rooney's perception and the brilliance of her character relationships.
Yawn.
Posted by Joanne at 7:01 AM