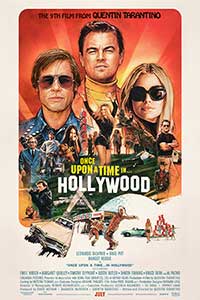 I’m often conflicted on Quentin Tarantino movies. Some can be so good (Pulp Fiction, Inglourious Bastards) and some can stink (Hateful Eight).  Once Upon A Time in Hollywood is a winner. Whew! Quentin captures the 1968 and 1969 vibe with the look, the music, and so many nuances. Leonardo DiCaprio plays an actor on the downhill slide, and Brad Pitt is his stunt double with some issues. Both are excellent. Trust me, there’s a scene with Brad facing off against an actor playing Bruce Lee – it’s priceless.

Margo Robbie plays Sharon Tate. She’s not in it a lot really, but she does shine and, obviously the Tate figure with the whole Manson ordeal plays a big part of Tarantino’s rewritten history. It’s good to know the backdrop from that time period and understand the references. A younger guy at my workplace thought the flick was boring…but he didn’t “get” it. With Tarantino, you do have to think  a bit (in a good way).

My husband thought it was a tad long and would have edited it down. I can understand his point, but I was okay with the whole flow and mood of the movie. Plenty of laughs and good acting. And I was curious where some of the twists would take us. All in all, I give credit to Quentin for his efforts as a very creative director. He’s unique. Yes, there’s a blast of violence at the end and it works. Plus stay through the credits – some funny touches there with Leo. Plenty of famous faces show up with bit parts – Al Pacino is funny. Once Upon A Time in Hollywood totally entertained me on a rainy Saturday morning – yes, three hours of movie amusement.  Worth the tub of popcorn.