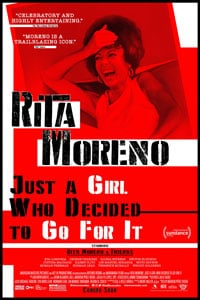 Rita Moreno - Just a Girl Who Decided to Go For It is a fascinating, energetic documentary of a woman who's been a trailblazer in film, television, stage, and music. She's now eighty-nine (87 in this film), and she's a firecracker.  She's won the EGOT - Emmy, Grammy, Oscar, and Tony.

Stand and applaud just for that.

She's had to work harder than many to break barriers and get past limited roles as the "immigrant", the "native girl", "girl with the accent", etc. Beautiful, exotic, dancer background, singer, she kicked butt as Anita in the original West Side Story.  Yes, proud of her Puerto Rican heritage, but "I like to live in America..." sung with passion and grit told her story.

So many roles (the nun in OZ on HBO, on The Electric Company with Morgan Freeman, singing with Muppets on Sesame Street, and more in each decade) and still worked in the reworked One Day At a Time on Netflix, Rita Moreno is also an activist and she speaks her mind. She ain't shy.

She had a long time affair with Marlon Brando. She had a long (but difficult) marriage that produced a daughter she's very close to and has done song and dance with back in the day. The daughter, in this documentary, still works with her mother and they are quite a team.

This is a jampacked documentary and you'll come out of it feeling the energy and also shaking your head with admiration for Rita Moreno - the Girl Who Decided to Go for It.