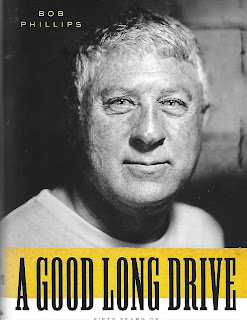 Fifty seasons. That's how long Texas Country Reporter has aired in Texas. Cover blurb: It focuses on "ordinary people doing extraordinary things."  And at the center of it is Bob  Phillips, the show's creator and host - an erstwhile poor kid from Dallas who ended up with a job that allowed him to rub elbows with sports figures, entertainers, and politicians but who preferred to spend his time on the back roads, listening  to less-famous Texans tell their stories.

A Long Good Drive by Bob Phillips is a folksy memoir.  He tells of his early days as a student at SMU, his internships, and jobs in broadcasting. This greenhorn learned the ropes, worked any and all hours, and often created as his life evolved. He acknowledges a lot of luck  along the way as well as excellent mentors who saw his potential. He learned  to ask the right questions and his natural curiosity and interest in people helped ordinary folks open up on camera.

p.137  A possible story on the show... It's not what it's about. It's about the story behind the story. That's what Texas Country Reporter is all about. Stop, listen, and watch, and you'll probably learn that there is a hidden gem somewhere in a story.

cover blurb  Spanning generations,  A Good Long Drive is proof that life's journey really is a destination unto itself.  Bob Phillips is  a good storyteller and this memoir  was interesting, amusing, and a fun quick read. Grab a snack and enjoy the ride.