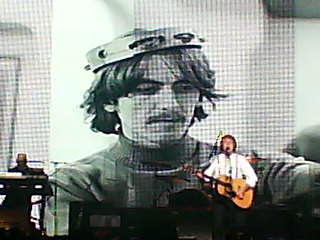 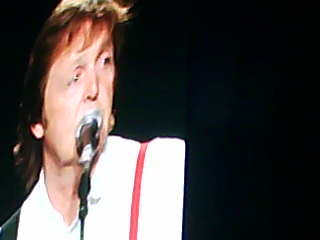 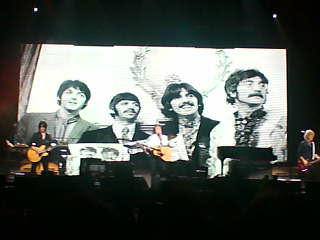 He bounded on stage (new Cowboy Stadium) nattily dressed in a black suit. Sir Paul McCartney has those Paul eyes, that impish grin, and a cheeky sense of humor. He and his band launched into "Baby, You Can Drive My Car" and for the next three hours steered us on a magical music tour.

Two songs in he took off his coat and quipped, "That's the wardrobe change." He rolled up his white shirt sleeves and against a stunningly huge video backdrop shared Beatles, Wings, some Jimi Hendrix, a Buddy Holly tune, salutes to John and George, and sang "My Love" which he wrote for Linda, with an ache in the voice.

At age 67, the lad from Liverpool has lost good friends, but has gained a world of fans of all ages who stood and swayed to "Give Peace a Chance", "Hey Jude", and "Let It Be". We collectively jumped at the pyrotechnics and fireworks during the massive crescendo chords of "Live and Let Die" - definitely a whoa! moment. He rocked us out with "Back in the U.S.S.R", "Get Back", "Band on the Run", and "Helter Skelter".

So many, many brilliant songs - both words and music. My absolute favorites are poignant and stirring and sounded so good even after the millionth time he's played them: "Yesterday" on guitar. "The Long and Winding Road" on piano.

Sir Paul McCartney, a talented bloke and musical poet. Thanks.
(images thanks to cellphone of Cheryl Wolf (fabulous daughter of Ann Summerville) People had huge cameras. But I follow rules and was afraid of confiscation. Damn my rule following heart.