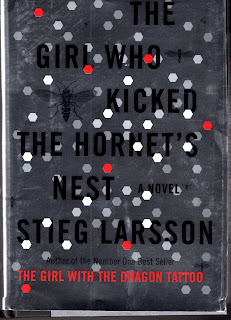 Stieg Larsson kicked butt with his trilogy - Girl with the Dragon Tattoo, Girl Who Played with Fire, and Girl Who Kicked the Hornet's Nest. Lisbeth Salander is a character for the ages. Computer hacker genius, total anti-social mess, and a girl who looks out for herself. She is compelling and spellbinding in her life, past, and relationships. Mikael Blomkvist, reporter and writer, is forever tied to Lisbeth and ultimately must save her as she has saved him.

The books have that European aura - sexual tension, violence, and intelligence - adult material that will hook you, and it's nice to be treated as an adult. American sensibilities and squeamishness be damned. Mr. Larsson plays his cards right and heightens the pace on every page. He gets a tad political in the third book and I was forced to skim a teensy bit, however the writing and storyline are still stellar and worth reading.

It's a shame Mr. Larsson died before reaping the benefits of worldwide acclaim. The Swedish film version of Girl With a Dragon Tattoo was well cast and excellent. I rented it on NetFlix (hurrah) and stayed hooked. Yes, there are subtitles, but hey, we can all read. Exercise the brain and eyes at the same time. The young lady cast as Lisbeth was scary excellent.

So books, film - however you can get your fill of Swedish meatballs - seek out the trilogy and root for Lisbeth and Mikael. Gotta love conspiracies, chases, shootouts, and computer hacker success (against the bad guys).

Labels: Girl Who Kicked the Hornet's Nest, Girl Who Played with Fire, Girl With the Dragon Tattoo, Stieg Larsson, Sweden