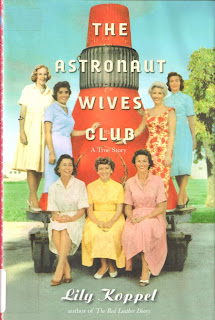 The Astronaut Wives Club by Lily Koppel is a non-fiction, behind the scenes look at the women behind the men on the moon. It is fascinating. The Mercury Seven astronauts were defying death, but on earth the young wives were "transformed from military spouses to American royalty." (cover blurb). Annie Glenn, Rene Carpenter, Trudy Cooper, and the others provided support, friendship, and dealt with the media. They were in a unique situation and had to improvise as the missions moved forward.

"We really felt this enormous loyalty to the guys. You just don't see what you don't want to see. But the press didn't help matters. They tried to make them like perfect American boys. Well, in most respects they were, but they were human, too, just like the rest of us. Astronauts get along so well because they don't talk. Women of course have to talk." p. 263

The Astronaut Wives Club opens the door to life on earth as an astronaut's wife - building new homes, raising kids, meeting Jackie Kennedy, and home to do laundry, or sadly attend a funeral. It included dealing with affairs and opening your home to media attention. This was the Wild West time for Space Exploration. Enter the capsule, read, and enjoy the ride.