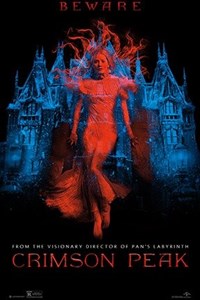 Crimson Peak is not normally my kind of movie genre – gothic romance/horror. However, the cast list is stellar and it is directed by Guillermo del Toro, who is a genius. Indeed, the film is lush and the settings are fabulous. The creepy house is worthy of an Oscar as it looms over a sparse countryside. Inside is another story – things go bump in the night and very dark misty ghosts haunt the corridor. Let’s just say, “Don’t drink the tea that’s served in the house.”  (spoiler alert – how much poison will kill you?)

So, Mia Wasikowska (a stellar young actress) falls hard for dreamy Tom Hiddleston’s  Baron.  Her father frowns and has a private investigator check into some shady dealings. It’s the late 1800’s and basically the father calls Thomas out at a ball. Well, alas, the dad ends up dead at his private club, Mia is an heiress, and she’s able to marry and move to the estate. Hoorah for true love. Boo for Dad’s death. Hoorah for true love. Boo for the creepy sister (a very severe Jessica Chastain) who comes with the house. Oh Mia – so naïve, so young, so eager to be friends with the sister and asks for a set of keys to all rooms.  What?  You dare to think you can roam this house freely and uncover its secrets?

Where money is involved, trouble follows, and Mia slowly figures out she’s a pawn in an evil game. The creepy factor is high and Crimson Peak offers a good scary ride in time for Halloween. Is it a tad predictable? Yes. However, I knew what I was in for when I paid my cheap matinee price. I was scared just right and came home to put on all the lights in the house. Rattle a key or two and explore the basement. You never know what bones will turn up.