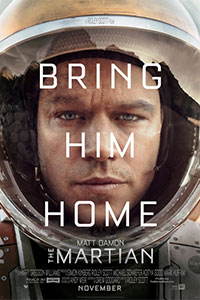 The Martian gets a huge thumbs up from me, and Matt Damon is excellent. We first meet our NASA team on Mars as they do their research jobs and live. Concern arises when ground control announces the arrival of a wicked dust storm. The crew is told to get situated and leave the mission a tad early. Jessica Chastain is the leader and it’s her call to lift-off after seeing Matt Damon (Mark) get hit by debris and knocked out. They assume he is dead, based on the situation. She did what she could and the team agrees, saddened by his passing.

Back on Earth, Jeff Daniels is the NASA head who has to announce the death of an astronaut. Meanwhile, back on Mars, the dust storm leaves and we hear a gasp and see movement as Mark regains consciousness. He’s injured, but alive. He manages to get back to their base, sew himself up, and assess his situation. He counts food bags, works on communications, and as a botanist he proclaims he needs to “Science the crap out of everything.” He’s rather matter of fact about the chance for death, but he plans to live as best he can for as long as he can. He has rover transportation, and figures out how to plant and grow potatoes to extend his nutrition.

Will he make contact with Earth? What happens then with NASA? Can he be rescued? What about his team who are flying home from Mars? Can they turn around? What about the Jet Propulsion Lab and math geniuses? Does the math work in regards to fuel and time calculations? And really….what could go wrong? (other than the only music Mark has is disco music left from Jessica)

The Martian does a great job with depicting the astronaut challenges for living.  Matt Damon brings such a nice manner to his role – he’s smart, funny, and very believable. He’s human and gives us the full range of emotions. The movie was a tad long – they could have tightened up some of the earth segments. But when Matt Damon is on screen, he holds our attention.