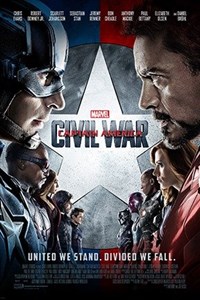 I am late to the Marvel party, but here's a review as this movie slowly eases out of theaters

Captain America is also loyal to his friend the Winter Soldier who’s been unthawed and released to create havoc. This movie has everybody except Thor enter the fray. The Scarlett Witch uses her powers. Vision is overseeing her. Ant Man and Spider Man provide some comic relief. The new Spider Man is a smart aleck kid with some great lines. Otherwise, the film stays dark and serious as Captain America and Iron Man pursue their goals and go toe to toe.

The movie could use some editing. That’s my usual complaint. The performances are fine and the action battles are exciting. Good film-making and special effects. Choose your team – Captain America or Iron Man, place your bets, and root for a winner. Then again, do we win if they are all divided?