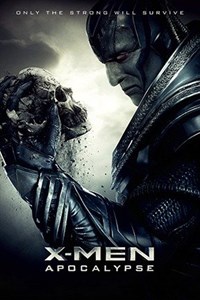 X-Men: Apocalypse has had so-so  reviews from “real” critics. Me personally - I liked it.  For a Saturday cheap matinee, it was entertaining with good special effects, decent acting, and it moved along. I did not find myself looking at my watch or eager to edit this film down. Plenty of characters moved in and out of the story line and that kept my interest.

It does seem appropriate to mention that this film is applicable to the concept today of “why can’t we all get along?”  Yes, mutants have different skills and might look unique, but for the most part, they just want to get along and make the world better. So root for Professor X, Raven/Mystique, and the “good” crew to destroy the evil Apocalypse. Enjoy the battles and marvel at our speed demon who can stop time – Evan Peters. That special effect is awesome.

All in all, this is a very entertaining popcorn movie and keeps the X-Men franchise moving along. There’s humor, drama, and yes a quick Wolverine appearance – hooray for a Hugh Jackman sighting.

C’mon, you know you should see this on the big screen.  Enjoy and reflect on what mutant skill you’d like to have.