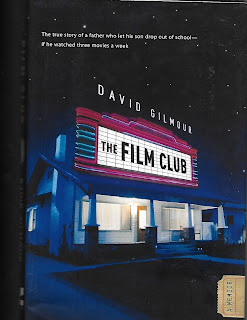 This little book I picked up for one dollar at our Bedford Library book sale. It proved to be quite interesting. It's a memoir of a year in a father/son's life. The fifteen year was flunking everything in school, bored, and lacking motivation. David Gilmour threw out an offer - drop out, not work, not pay rent, but his son had to watch three movies a week with his father. The boy accepted. Hence The Film Club.

cover blurb - The films  (ex. True Romance, A Hard Day's Night, Rosemary's Baby, and more) got them talking - about girls, music, heartbreak, work, drugs, love, friendship - and opened doors to a teenager's interior life at a time when a parent is normally shut out. Ultimately, at the end of the year, the young man made a decision that surprised even his father.

I found this book to be quite a revelation. Obviously, the young man was intelligent, caring, and did not have a slacker soul. Oh, he screwed up during the year, and the father/author is very honest in his writing about disappointments, worry, and a bit of "what the heck am I doing?" thrown into the mix. But, it also revealed a different version of education and poked into corners beyond the norm.

The Film Club reminded me of movies I need to watch again, and some I need to discover. The book was worth way more than a dollar.