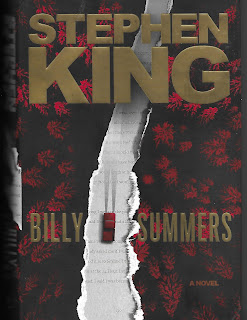 No horror.  Billy Summers is a bad guy (but he's really in his heart good with some morals) - he is a professional killer who will only kill someone he considers a truly bad person.

He's the best. His time in the military - Iraq war vet sniper. He can vanish without a trace.

What could go wrong when he's hired to kill a man who killed a bad guy? Everything.

Billy Summers by Stephen King is excellent. We learn a lot about Billy when he's hired by Nick to kill Josh Allen. Oh, there's so much backstory and Billy figures he's getting double crossed when the final payment does not get wired. He digs deep and he's going to find the man behind the man behind the man. Who's the power broker who's not paying up on Billy's retirement party.

Plus there's a young woman who gets involved. Billy saves her, she saves him.  cover blurb - This book is about love, luck, fate, and a complex hero with one last shot at redemption. I really enjoyed this book. Stephen King is excellent at character development and his writing is tight. You root for Billy and until the last page, you, the reader, are all in and then drained from emotion. Good stuff.