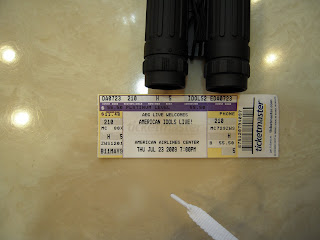 Once in awhile, as a writer, it is good to emerge from the darkness of the writer cocoon and see what the heck America is up to. (yeah - dangling preposition - so what?) American Idol is a phenomenon for Fox television and music in general. I watch when the show hits the top ten because usually you are witnessing some talented kids. And yes, I've bought some CDs and enjoyed singers (not necessarily winners) from Idol. Kelly Clarkson, Jennifer Hudson, and believe or not, Elliott Yamin have entertaining discs.
Well, a month or so ago, a friend Evelyn called to say she and Linda were going to get tickets for the 2009 tour. "You want to join in? It was a great batch of kids." Sure. Last night, 7/23, I witnessed America screaming, America squealing, America opening its purse strings and forking out dough for tickets, parking, food, and souvenirs. Forget the electric bill - America is paying for entertainment - and to see Adam Lambert. Oh yeah, Kris Allen won. Nice kid. Plays guitar and piano. But, who's kicking ass with Led Zeppelin? Who's singing a totally amazing version of "Mad World"? Who's bringing down the house with Fame and Let's Dance a la David Bowie? It's Adam Lambert - 2nd place. The kid is amazing and can sing.
Kudos to 5th place Matt - he has practiced and really pulled it together on the piano. Very enjoyable set. 4th place - Allison, age 17 - massive lung power. She rocked Heart's "Baracuda".
Like the Olympics - post skating - where the kids just skate for fun and are awesome, this show brought out the real talent of these singers in a relaxed setting. Sure, it's a new set of pressure, but these performers are thriving. Yeah, it's business. But heck yeah - it's fun. More power to American Idol for keeping the entertainment industry humming. Some might say it's a sell out or too commercial. Nah - I say - it's America. The good will rise to the top, the bad - eh, not so much. The almighty dollar speaks, and that's okay.
More music talk to come - stay tuned for summer sizzling videos and cds.
Joanne
Posted by Joanne at 9:36 PM