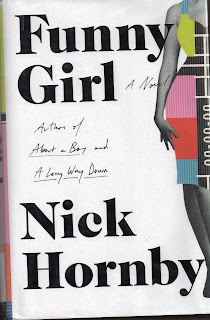 I've liked Nick Hornby's writing ever since discovering About a Boy and also High Fidelity (both turned into good movies, too). Now with Funny Girl, he brings his breezy style to the 1960s and early British television.

Barbara Parker is crowned Miss Blackpool and keeps the honor for a few minutes. She realizes it's time to get out of the small town and try to conquer London. With a new name, Sophie Straw hits a casting call with her comedic talents (and other assets) blazing and becomes the lead in "Barbara (and Jim", a comedy series on the BBC.

Hornby explores Sophie's stardom, the writers, the producer who's in love with Sophie, the lead actor Clive who thinks he loves Sophie, and the magazine writer who's been loyal to covering Sophie's rise.
The story moves along briskly, the humor is light, and we enjoy a "group of people who are funny, if flawed, and illuminates their deep connections, complicated relationships, and wise humanity." (cover blurb)

This is a fun, quick read. Nick Hornby did not disappoint.