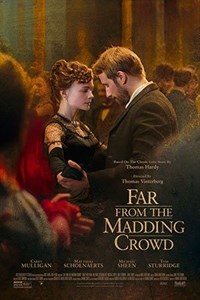 It was enjoyable to go to the movies and not have anything blow up. Well, maybe a heart or two, but it was done quietly in Dorset England, 1870. Far From the Madding Crowd is a rich period movie based on a Thomas Hardy novel. Unlike many of his books, this one actually has a happy ending. Carey Mulligan plays the  very independent Bathsheba Everdene. She’s a young woman who inherits a farm and intends to prove that she can manage it without  a husband. She’s extraordinarily modern in a very modest time full of manners and social mores.


Miss Everdene says, “It is difficult for a woman to define her feelings in language which is chiefly made by men to express theirs.”  The movie revolves around her independence and interactions with three possible suitors. I will not divulge the winner. Gabriel Oak (a very stoic (hot) Matthias Schoenaerts) is a sheep herder/farm hand with plenty of wisdom from observing the world. Mr. Boldwood  (a shy Michael Sheen) is her wealthy neighbor. It would be quite convenient for them to marry. Or there’s the dashing soldier (charming Tom Sturridge) who’s quite the lady’s man.


The dialogue is expressive and often what is not said is what counts. There is plenty of soulful eye gazing. The scenery is gorgeous and well filmed. Carey Mulligan is an excellent young actress (only 29) and can say so much with her eyes. She’s smart, energetic, and fully developed as a character.  Far From the Madding Crowd is an artsy flick and far from the summer blockbuster blow ‘em ups. But sometimes it is nice to get away from the crowds, travel to old England in your chair, and watch a love story evolve.
Posted by Joanne at 6:00 AM