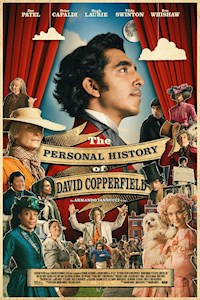 No, Alex Cavanaugh - I did not see Tenet yet....I dipped my toe into the movie pool with a shorter artsier flick - The Personal History of David Copperfield.  Ray was busy with watching final golf rounds, and I did want to see this movie. I've fond memories of reading Charles Dickens' David Copperfield. I had a Dickens phase back in junior high.

So, ordered my Cinemark ticket on-line and it was on my trusty phone. I masked up, sucked it up, and ventured forth.  On Monday afternoon 12:30 pm, there were six people spread far apart in this theater. All masked. No one sneezed or coughed. I felt safer than in our grocery store.

And it was SO nice to see previews and the movie on the big screen. When the lights went down - I was in bliss.

Clever flick and good distillation of a long book with a ton of characters. Dev Patel is excellent as his fortunes go up and down, depending on family or his own wits. Tilda Swinton plays the eccentric aunt and Hugh Laurie is wildly amusing as Mr. Dickson. Peter Capaldi is that rapscallion Mr. Micawber. And Ben Whishaw is suitably creepy as Uriah Heep. Agnes is clever. Dora is ditzy. Through it all, Dev/David Copperfield shines.

I was very entertained and ready for more. Ray and I shall venture out for Tenet this week. Previews have me excited for the fall/winter season. We shall see. I hope folks behave and the theaters keep up their new cleaning/air ventilating, etc. All such a crap shoot. But for two hours, I felt alive and engaged in the magic that is cinema.