Monday Muse - The Warmth of Other Suns by Isabel Wilkerson 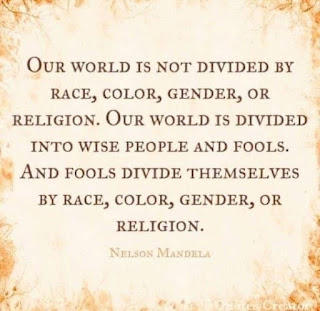 Just a great quote to ponder 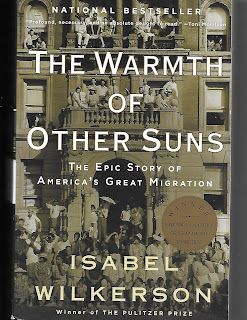 Just an excellent book to read and ponder. In between my light pool reads, I've been working my way through  The Warmth of Other Suns by Isabel Wilkerson.  This is a non-fiction book that reads like fiction as Wilkerson follows three main characters in their migration from the Jim Crow south.

back cover blurb  From 1915 to 1970, six million black citizens made an exodus that changed the face of America. They fled the South for northern and western cities in search of a better life. The author interviewed more than a thousand individuals, gained access to new data and records, and wrote this definitive and vividly dramatic account of how these American journeys unfolded, altering our cities, our country, and ourselves.

I really enjoyed this book and found it fascinating. Ida Mae Gladney,  from Mississippi fled to Chicago. There and parts north she and her husband worked hard,  raised a family, and still enjoyed her home cooking skills - like a mean cornbread. They just didn't look back.

George Starling fled Florida before a lynching. Once in New York City, he became a porter on the train and road the rails the whole rest of his life, seeing the day when black folks did not have to move to a separate train car when they crossed into the South.

Robert Joseph Pershing Foster, MD fled the South to California and worked hard to become the best doctor, have the best reputation and practice, raise his daughters to be the best. He was a gambler and an achiever, wanted acclaim, and attention. In a way, his soul could never be at peace with being a black man from the South.

The history,  the lives, the aches, and sorrows. The hard work. The extra scramble. It's something I can't fathom. But I'm grateful for Isabel Wilkerson's words and work to help anyone understand what (black) Americans have encountered and endured in the 20th century, and appreciate the achievement of survival and growth for each generation.  The Warmth of Other Suns is a stunning book.

Labels: book review, Isabel Wilkerson, The Warmth of Others Suns