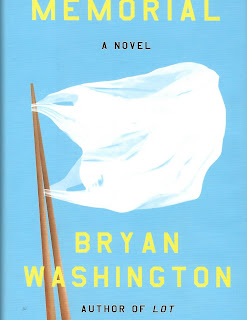 I had read good buzz about Memorial by Bryan Washington so I was excited to begin this book. It's a quiet book - rather reflective.  Benson (Black daycare teacher) and Mike (Japanese American chef) are a couple living in Houston. When we first meet them, they are on the outs. It's convenient to be together, but they seem to have lost connections and interest.

Multiple issues take them apart and that causes reflection on both sides. Mike hears that is estranged father is dying in Japan. He flies to Japan to reconnect and care for the man as he finishes his last weeks.  Meanwhile - Mike's mother has flown in for a visit and Benson is left living with her and slowly learning about her, Mike, and frankly himself.

cover blurb - An absurd domestic situation leads Benson to a deeper understanding of family and himself. Both men will change in ways that will either make them stronger together or fracture everything they've ever known. Memorial is a funny and profound story about big first loves, family in all its forms, becoming who you are supposed to be, and the limits of love.

At first I wasn't sure about this book, but I became interested in the characters and their transformations.  It's a rather different book for me with male characters reacting to love, feelings, family issues. As I said it's quiet - and often those are the ones you have to watch out for - they can pack a punch.