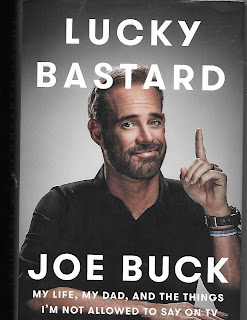 If you've watched any football or World Series baseball, then you've probably seen sports broadcaster, Joe Buck. Some folks hate him. Me - I like him. In his memoir, Lucky Bastard, Joe acknowledges the naysayers, and with humility and humor, he tells his story.

As the son of Jack Buck, the voice of the St. Louis Cardinals, Joe learned a lot as he sat in on broadcasts as a kid, played with baseball players' kids, and absorbed sports. Yes, he had a slight advantage with connections, but still had to start at the bottom and pay his dues.

cover blurb - He recounts a lot of pretty damn entertaining mistakes along the way. He shares the lessons he learned from his father, the errors he made, the personal mountain he climbed and conquered, all of which have truly made him a Lucky Bastard.

This memoir is rather light and breezy. I like the writing and Joe Buck lays a lot out - a confession of insecurities, struggles, and a need to live up to his Dad, whom he admired the most in life.

p. 224 I think Kate (Hudson) understands fame better than anybody. She told me once, "Americans love a good success story. They're just not sure what to do with the success story that comes out of a success story."  In those two sentences, she summed up one of the essential conflicts in my life.