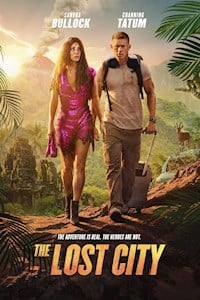 Last Thursday began as a cold blustery day. I decided I needed some sunshine and stupidity in my life, so off to the movies. The Lost City starring Sandra Bullock, Channing Tatum, Daniel Radcliff, and Brad Pitt filled all of my goals.

This is old fashioned rom-com fluff with no redeeming  value. But those of us in the theater laughed out loud and enjoyed the ridiculous situations. Sandra B plays a burned out romance novelist. Channing is her cover model, Dash. Daniel Radcliff is the wacko billionaire who kidnaps her from her book tour,  to help translate some ancient parchment.  He's convinced that from her books, his lost city on an obscure island, actually has treasure in a tomb. Are you following this?

Channing/Dash is sure he can save her, but he enlists an old buddy of his, Jack, who's military trained. Jack (Brad Pitt) is a real-life Dash - handsome, daring, and rom-com ready for anything.

I won't go into more. It's convoluted but all plays well to the casts comedic skills. Sandra Bullock is a treasure and she was awesome in this movie. The cast looked like they had fun with it. The Lost City romp was exactly what I needed. I came out smiling  to a sunny, still blustery day. It was worth my five dollars and worth you streaming when it hits your television.