Sing into the Weekend - Come From Away 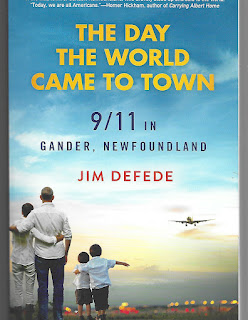 The Day the World Came to Town. I read this book and reviewed it two years ago. I was prepping before seeing a Broadway touring production of Come From Away     Alas, my tickets were for March 2020. Whoops!  Pandemic shut down the world. 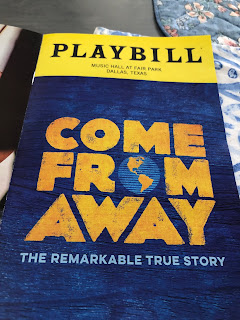 Two years later, here's my Playbill for Come From Away. I enjoyed it two Sundays ago. This was a glorious production. Very clever telling of September 11, 2001 when thirty eight planes landed in Gander, Newfoundland. They were diverted due to airspace closures and an American shutdown due to the terrorist attacks.

The population of Gander (7000) doubled in size and everyone worked  together to care for, feed, shelter, and help strangers who were scared, worried, and stressed. Multiple languages, cultures, food needs, and more needed to be addressed.

This Broadway show is a complete ensemble - no major standout songs or stars. There is no intermission. It's a small cast that transforms in different  scenes with a clothing change and movement of chairs and tables. There is humor even in dark times. The love and care shine through some catchy tunes and good voices.

Come From Away is a show with heart that shows the goodness of people in  a tough time. The lessons from 9/11 shine through and are applicable today. It was worth the two year wait to see. Live theater is just SO fun.