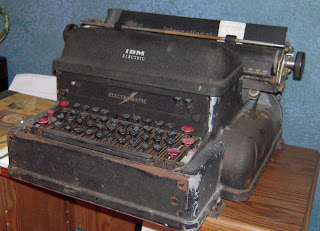 #atozchallenge another week. We're on the downhill slide of April

T: Talking      The less said the better - Jane Austen/ Sense & Sensibility  Indeed, as a writer, it's often better to listen. You can pick up so much good material.

Timing - There is a time for departure even when there's no certain place to go - Tennessee Williams
That's true of some characters - best to write the loud obnoxious sidekick in small doses. Television series on cable have made it a bloodsport - favorite characters are killed with abandon. It surprises the audiences and keeps us intrigued. I'm still not over Adrianna being executed on The Sopranos.

Typewriter - We got this IBM from Ray's folks - grimy & filthy from sitting in their garage. It's now in my office looming above my head, filled with noir tales of old.

Finally, I chose Turpentine. There are far more lethal T poisons, however everyone has turpentine in the garage. It rarely kills because it's painful to breathe or swallow. But, it's a great red herring - make a life appear to be threatened.
Posted by Joanne at 6:30 AM