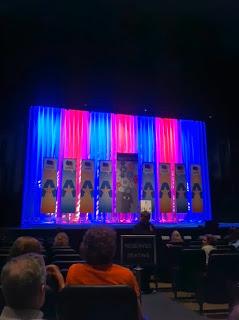 Thursday evening, after a tasty meal at Fuzzy's Tacos, Ray and I headed to Texas Hall at the University of Texas at Arlington. There we enjoyed another presentation of the Maverick Speaker Series. The guest was ESPN founder and entrepreneur - Bill Rassmussen. This engaging man was fired from his job as communications director for a New England hockey team. "Hmm, what shall I do now?" Well, he and another fellow had a vision for a 24 hour sports network in 1979. Cable television was a fairly new concept, and there was a lot of time to fill. Innovation, timing, perseverance, and some luck all played a part. 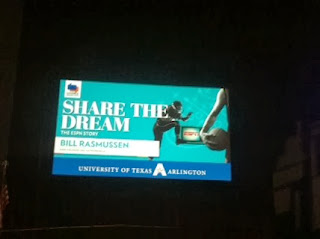 Financing was achieved by a deal with Getty Oil. Advertising courtesy of Budweiser. Communications. Technology thanks to RCA. And subscribers. NCAA football coverage proved huge, along with March Madness basketball, and ESPN Sports Center. Mr.Rassmussen viewed sports as a common factor for people. The mission statement today emphasizes any and all sports at any and all time. One of the earliest time fillers was Irish hurling.

Today ESPN has many outlets worldwide. It is a 66 BILLION dollar business. It is now owned by Disney Corporation and brings in half of Disney's profits - that is an amazing statistic. Ray and I enjoyed Mr.Rassmussen's talk - he's now retired and shares his wit and wisdom as a speaker. It's always good to gain perspectives from innovators like him.

And Ray's probably watching something on ESPN right this minute.
Posted by Joanne at 11:02 AM