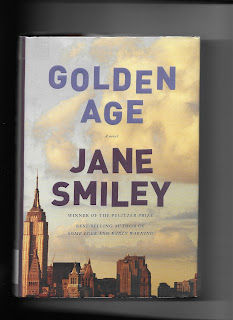 Golden Age by Jane Smiley is the finale of her trilogy which included Some Luck, and Early Warning.  She’s covered a century of life for the Langdon family – touched on America’s history as a backdrop, and brought to life the turmoil and triumphs of generations.  Golden Age opens in 1987 – economic, social, political, and personal challenges face the current tribe.  Michael and Richie, the twins, now work on Wall Street and government – high stakes fields. Charlie, a newcomer to the family, proves a worthy rival, and Guthrie who should run the family farm is deployed to Iraq.

Climate change concerns Felicity and could prove the undoing of the Langdon legacy. Here in the 21st century, the Langdon women find themselves charged with carrying their storied past into an uncertain future. (cover blurb)

Jane Smiley digs deep into the characters and the family. You, the reader, will find an underlying thread of similarity in all family travails. Love, hate, revenge, and faith all play a part as the family works through its struggles to maintain dignity and their heritage. And despite luck and early warnings, it is a golden age of life and writing. Enjoy this saga.