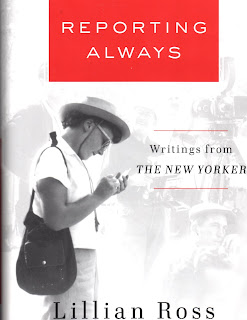 Lillian Ross’s Reporting Always is a collection of journalistic pieces from The New Yorker magazine.  As a staff writer since 1945, Ross, in writing entertainment profiles created scenes, almost like a novel. She included humor and details that “bring her subjects to life on the page. Her style has been studied and imitated.” (cover blurb).  Her articles and Talk of the Town spans sixty years – meet Robin Williams and Mrs. Doubtfire, Harry Winston and the world of diamonds, Ernest Hemingway drinking champagne and shopping for a coat, John Huston on set, and John McEnroe on a tennis court.

She always considered herself a reporter. She was a pioneer and influence on writers. In the Forward, David Remnick writes, “Her hallmarks are her keen eyes and ears and an austere, straightforward style. As a storyteller, she has an abiding faith in the magical properties of facts. She has an antipathy to analysis, flourishes, and showing off. With an almost cinematic use of scenes, she makes her dramatic points by showing what she sees and hears, relying on the cumulative power of what happens.”  Show, don’t tell is the writers’ mantra.

Lillian Ross declared, “A reporter doing a story can’t pretend to be invisible, let alone a fly; he or she is seen and heard and responded to by the people he or she is writing about. A reporter is always chemically involved in a story.”  In her introduction she also says, “Innocence is an often ridiculed and abused word. To me it is a reliable one. And it naturally translates into humor. It is what has always let me to my subjects.”

Her heroes in writing are Hemingway and Salinger “because both had the strength to hold on to themselves…..More than ever, I respect them for their courage to have been like no one else on earth. And what they had in common was deepest innocence.”

I recommend Reporting Always by Lillian Ross for its writing, perspective, and reporting example. Her love of her job, the people she encountered, and her interest in the famous or the mundane shines through. I’m guessing you don’t last this long in the business without being a class act. And that shines through too.