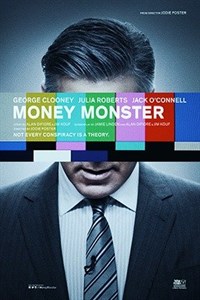 Money Monster is a very slick ninety minute movie, directed by Jodie Foster, with nothing really new to say. It’s entertaining and attention grabbing, and yes we know that Wall Street is evil, the little guy has no control, and yes, there’s a reason for financial anxiety.  George Clooney is perfect as Lee Gates, host of a financial advice show filled with props, dancers, and eye popping presentations of money matters and stock tips. He’s the money snake charmer, glib but ultimately has a conscience.  Behind the scenes in the production room, Julia Roberts keeps the ball rolling with a ready rapport and a nose for news. Unfortunately an intruder with a gun, Jack O’Connell, stops the show with his rant, demanding to know what happened with Ibis Clear Capital. How could a computer “glitch” ruin lives.

Julia keeps all the balls in the air as the drama plays out on live TV, and she has reporters and connections scurrying everywhere to find out “what happened”. Was Dominic West (Walt Camby) really in Geneva or were there secret shenanigans with Ibis? Eyes are on the young man pleading about how “they” are stealing from us, but nobody asks how.  Meanwhile, cops are swarming while folks in bars, work, and all over the world are watching this “new reality” play out on television.

Money Monster is fast paced, tension filled, has some humor, and shifts in tone with ease. Solid acting raises the bar, and you’ll be entertained. Then go home and tuck some money under the mattress, just in case.