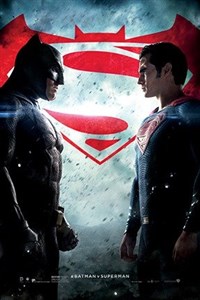 since I blogged A to Z in April - we are now catching up on some older stuff.

It’s too long. I might as well start every review for an action hero movie with that line. It’s true and generally it’s the final big bout of mayhem that goes on and on and on. I get the idea – good vs. evil, blah blah. However, I realize I am not the target audience. I am not a male between the ages of ten and one hundred. I recognize that fact, so use my comments at your discretion. Batman v Superman: Dawn of Justice is worth seeing on the big screen and is entertaining enough. I realize that professionally paid critics have slammed it, but most folks I’ve chatted with gave it a thumbs up. Based on the dollars spent at the theaters, we’ll be seeing sequels, that’s for sure.

Ben Affleck is fine as the new Bruce Wayne/Batman. He’s a good looking guy, been working out, and is a formidable presence on the screen. He’s a tad cranky and has reason to be. Henry Cavill as Clark Kent/ Superman is darn pretty and very buff, but he does lack that certain sparkle that my fave, the late Christopher Reeve, brought to the screen. These guys are so darn serious – c’mon, lighten up a bit. You’re running around in tights, for goodness sake.

Gotham is under attack from evil General Zod. Superman’s battle causes damage to the city and Bruce Wayne Enterprises. Hence, conflict. “We’re all criminals,” says Batman. “No one stays good in this world,” says Superman. Jesse Eisenberg is the demented Lex Luthor, full of tics and fast talking. Amy Adams is Lois Lane, running about in high heels. And Gal Gadot is the mysterious Diana Prince/Wonder Woman – joining in the high jinx. I thought things picked up when she was on screen. The plot is convoluted and the goal is a huge cinematic battle. We are ultimately building toward some Justice League movies.

Face it – it’s DC comics fun brought to the big screen. That’s what  you are paying for and that’s what you get. Eat a huge tub of popcorn, drink a soda, and immerse yourself in another world. Are you team Batman?  Or Superman?   We all win when it’s Batman v. Superman on the big screen.