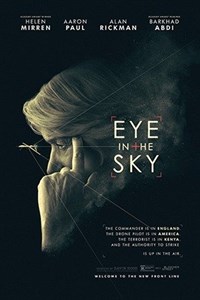 The Wall Street Journal calls Eye in the Sky a tick-tock thriller and I agree. It’s fast paced, tense, has well drawn characters and acting, and makes one think about current issues. Basically British military and government officials have hours to decide whether to order a bombing strike on terrorists in Kenya. Multiple views are given and it shows there’s a lot more to a drone attack than just pressing a button. So hold your breath and watch this movie unfold.

The always excellent Helen Mirren is Col. Katherine Powell and from her base in the UK she’s finally found location evidence for two radicalized terrorists. They are out of ground forces reach. In the foreign situation room, the Major (Alan Rickman in his last role – alas) is seeking to help her. The affairs minister (Jeremy Northam) and other politicians must discuss the ethics of these deaths versus a capture and some collateral civilian deaths. There are constant math updates – assessments on numbers. There’s a small spy drone in the terrorists home showing them preparing suicide bomb vests. Meanwhile, in Nevada two American drone specialists await orders to fire. However, their concern for a little girl selling bread in the kill zone brings the true face of terrorist war to the forefront.

In this age of drone spying and video surveillance, it’s nerve racking  to watch. One wavers with each statement, one can see multiple reasons to say “Go” versus “Stand down.” I will not spoil the end decision. Just know that Eye in the Sky will have you on the edge of your seat. …….   And war is hell.
Posted by Joanne at 6:00 AM