A to Z Challenge: F for the Faries Boys 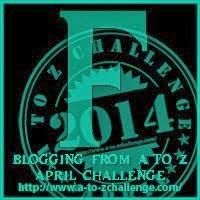 Greetings to F day. I'm deviating slightly from my normal pick character names. Since our last name is Faries, I decided to bring in a guest picker: my husband Ray Faries. When I met him, he already had two boys - from 1979 - Christopher Ray and from 1981 Kevin Michael - now stalwart upstanding young men with families.

"So Ray, let's look outside the box. What boy names would you pick today?"
(admittedly he'd stick with Chris and Kevin, but let's pretend he goes crazy. Yes I made him pick)

Flint Faries -  Flint is from the English and means resembling the hard quartz; from the stream.
Rather cool, edgy. I like it

Flux Faries  - Flux is from the English and means one who is constantly moving. Actually that fits Kevin - always on the go with projects.  Or for Chris - he has truly moved a lot due to jobs.

As an added bonus - Ray picked Farrah for a girl.  Gee, do you think he worshipped a Farrah Fawcett poster?
Farrah is from English/Arabic and means fair haired woman. Hello, Charlie's Angels.......

Thanks Ray Faries for participating in F day.