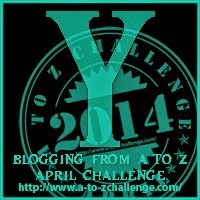 The end of the alphabet draws nigh, and I think as names in this world were created the energy spurt occurred from A to J.  Then it slowed down, uptick at S, and then folks lost interest for X, Y, and Z. But it is still April and we shall not yearn to quit.  Let's name some kids with Y

Boys:
Yadon (Hebrew) the lord will judge
Yakar (Hebrew) one who is precious
Yale (Welsh) from the fertile upland.  Does this name give automatic entrance to the university?
Yancy (Indian) an Englishman
Yarrow (English) of the fragrant herb
Yates (English)  keeper of the gates
Ymir (Norse)  from mythology - a giant from whom the earth was created
Yrre (Anglo Saxon) an angry man
Yves (French) a young archer

Labels: A to Z Challenge, Y